Usually by this time of year, we are done with first cut hay and the haymow is filled to the ceiling. However, Mother Nature, in all her fickleness, has seen to it that we’ve only had seven days of sunshine in the last five weeks.  Rain has been the norm.  Now, if you don’t know anything about making hay, you need at least two, if not three days of full-on sunshine to dry the hay enough to bale.

We finally got a break, the sun shined, and it was time to make hay.

Haying is tough, dirty work.  You sweat profusely. You’re covered in dirt, dust and hayseeds.  At the end of the day you feel like you’ve just finished the Tour De France.  TWICE.  Wearing a wool jacket.  Carrying a large sack of rocks on your back.  While breathing through a straw. Unless you’re lucky enough to be the guy in the air-conditioned tractor!

So, once the sun started to shine and the fields dried off, it was time to mow.  Luckily, there was no humidity (which causes the hay to take longer to dry) and a strong breeze was blowing (which helps the hay dry faster).

After the hay is mowed, it gets tedded.  A tedder is a piece of machinery that is pulled behind the tractor and driven over the rows of mowed hay.  The tedder spins the hay out and spreads it around in a thin layer, which helps it to dry.  Depending on the weather for the day, it may have to be tedded an additional time or two.  Drying the hay properly is essential – it keeps the hay from molding.  Even worse, wet hay bales that are stacked tightly in a barn can actually start a fire.

After the hay is dried, it gets raked into windrows (a long line of hay).  Again, depending on the weather, the windrows may be left to dry in the breeze for a few hours or longer.

Finally, it’ time to bale.  The tractor is hooked up to the hay baler, and then the baler tows a hay wagon is one long hay baling train.

The baler is driven over the rows of hay.  It shapes and ties the bales and then kicks them out the back of the baler into the hay wagon.

Once the wagon is filled, it’s time to switch and start all over again.  The full wagons are hauled to the barn and stacked by hand in the hay mow. 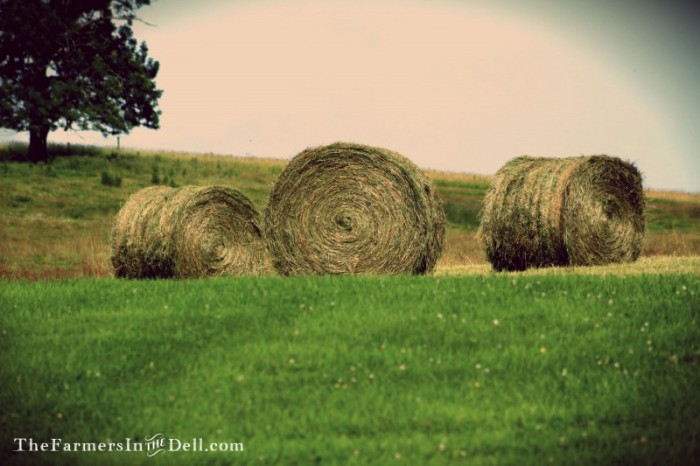 We also round bale a lot of our fields.  These bales are wrapped and stored outside for the winter.  Because they weigh several hundred pounds, a tractor is needed to haul them around when it’s time to feed the cows outside.

After several long days of hot, tiring work, it’s time to wait for more sunshine and then the job starts all over again.  This is why I don’t need a damn gym membership.

2 thoughts on “Make hay when the sun shines”