Donkeys…  their stubbornness is legendary.  They don’t want to do something – game over. Come back tomorrow and try again.  But there’s more to these animals then them just planting their feet in the ground and refusing to move.  They’re loyal, gentle, and protective.

So, when the little guy arrived, it was an exciting time.  Unfortunately, his mother did NOT see it that way.  She was not amused when he popped out.  And she was even less impressed when we put him in the pen with her.  She wanted nothing to do with him.

Over the next 24 hours, I bottle fed the little guy, kept him warm and played John Denver on the radio.

After a desperate phone call the following day, my horse whispering neighbor arrived.  “Gonna have to milk her,” she said.

“Ok, milk her… wait, what?  How the hell do you milk a donkey?” I said to her, looking at her like she was speaking in tongues.

“We’re gonna have to milk her.  The foal will get the colostrum he needs and it just might stimulate her mothering instincts,” she told me.  “Get a rope, we’re goin’ in.”

Now, for those of you who have never been around a miniature donkey, they almost look tooooooo tiny to do much damage.  Wrong, wrong, WRONG.  Personal experience has taught me that they’re quicker than lightning and stronger than an Olympic weightlifting team.

Now, at this point, I’d rather have a root canal, then be in this pen with a donkey who has NO desire to be around her foal or me.

Calm energy?  I feel like I’m being lowered into a viper filled pit!  Maybe if I had a few shots of whiskey, I could project calm energy.

The gate clicked shut behind us and the rodeo began.  Our “calm energy” plan went right out the barn window as she spun around, pinned back her ears and fired off a volley of hoof thrashes.  Around and around we went.  Dodging flying hooves.  Slipping on manure.  Waiting to see who would give up first – us or the donkey (most likely us).  By sheer luck, the foal, who was in the next pen, stood up and distracted his mother. We slipped the halter over her head and secured her to a post.

We took a much needed break and let everyone calm down.  We cleared the barn of dogs, cows, people and other donkeys.  It was go time.

I filled her feed trough with about 30 pounds of cracked corn – anything to distract this wrecking ball on hooves.  She liked it.

Next, we sat down and waited.  Two hours later, she was in a food coma and feeling more like herself.  It was now or never.  My neighbor bent down, Tupperware container at the ready, and…

She milked the donkey.

This went on every few hours until she was comfortable enough with us that she began to ignore us. However, the most nerve wracking part was still to come – we still had to get the foal in the pen with her and get him to nurse.  Sounded simple enough.

I gave the foal another bottle of milk replacer mixed with the colostrum and called it a night. We’d all live to see another day.

The next morning, we trotted the little guy into the pen.  He was as happy as a clam to see his mom.  Her, uuuummm, not so much.  She sniffed him and immediately let us know of her displeasure by kicking and bucking like she sat down on a hornet’s nest.  We spent the next few hours dodging every kick she would throw and trying to keep the foal from being on the losing end of his mother’s hooves.

We all retreated to our respective corners to ready ourselves for another round.  An hour or so went by as we tried to develop another plan.  Exhausted, the little guy laid down by my feet.  I sat down to console him, while simultaneously letting out an expletive filled tirade regarding his mother.  Suddenly, I felt a warm muzzle on the back of my neck and figured I was either going to get an unwanted haircut or she suddenly decided that she wanted what I had.  Luckily, it was the latter.

I slowly moved out of her way and crossed my fingers.  A few nuzzles and a lick or two and the little guy was on his feet, trying to figure out where to get dinner.  After a couple false starts and some redirection, we had contact.

Bruised and battered, we left mom and baby alone to get aquainted.  By the next day, they were inseparable.  Mission accomplished. 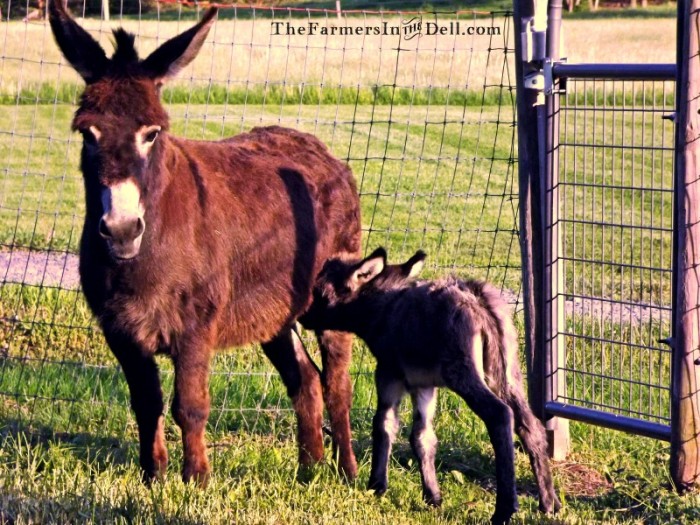 2 thoughts on “How the hell do you milk a donkey?”